Yep. Today was International Rock Flipping Day.
My hubby helped flip the sandstone rock that borders the driveway hosta bed. My camera at the ready, I watched as he used a hoe and in seconds the soil that hadn't seen light in decades was drenched in sunlight. Below are the photographs of the denizens of this shady little world. 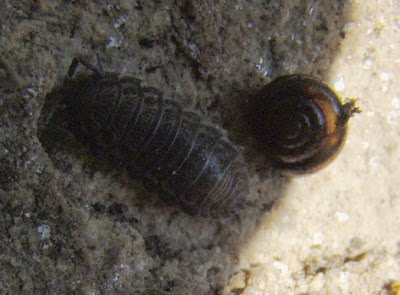 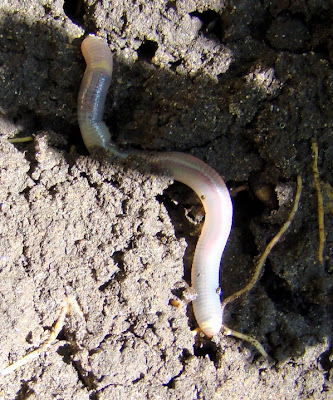 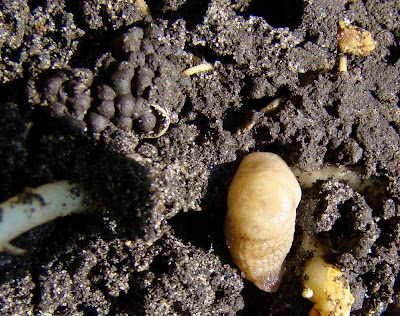 I'm sure you recognize the pill bug and the worm. I think this pix reveals worm 'poop'. See that little pile of small dirt balls? 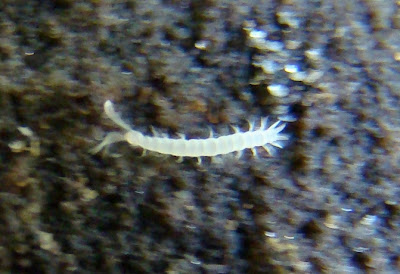 UPDATE. ONE YEAR LATER ON BUG GUIDE. THIS IS: Symphylan

I wish I had a way of showing you how teensy-weencie that little white centipede-like bug is. But he was massively upset that we'd up-ended his world. He desperately tried to get back into his shadow world. (UPDATE - My hubby and I agree that if placed on a US penny he would barely have run the length of the top of Lincoln's head)

My husband was happy to oblige him and after I snapped these shots did a reverse flip.

His take on the whole affair: "I don't like anything on the other side of the light."

You found good stuff. I'm such a dork that I forgot to flip. Dang. I'll flip tomorrow - a day late - to see what lies under...

I need to get on the ball and know what day it is. Sometimes life is a blurry mess :o)

I love the photo of the worm, and of that tiny white beastie.

I have collembola (springtails) in my garden plot that are similar to it, but with shorter antennae. BugGuide has long-bodied springtails like yours, about 2mm long.

Oh, cool Cathy!! This is the type of stuff I was hoping to find, but the two big rocks I flipped only had ants. So I went for something else instead (posted on my blog).

I helped my daughters raise worms for vermi-composting once. Other than earthworms, I haven't been terribly curious about things that lurk under rocks. But these rock-flipping posts are interesting.

You found some great stuff beneath those stones! The white centipede is very interesting.

Certainly looks like a centipede rather than a six-legged collembolan (has too many legs).

To show size one needs something that one can relate to -- like a coin ( as I saw in a recent Nature Remains blog - Cool Creature) or ball -point pen or pencil tip -- anything one can recognize. Helps a lot, otherwise how can one appreciate the smallness (or bigness) unless it is compared to what we know ?

It takes all kinds.

Nice pictures.And Cestoady's right about giving some recognisable scale (I'll check on the diameter of a US penny!).I should have given my skink's size. I'll add that to my post now!

What you found is what I expected to find. Mine was a bit different.

I can't believe how many rock flippers their are.-I've read 3 blogs that talked about rock flipping-I feel left out!-maybe next time.

This is such a crazy holiday! Never heard about it until reading many others blog postings! Thanks for posting your great finds!

Cathy - I flipped rocks today for a short while then stopped flipping when I found a mound of fire ants. Then I flipped out!

Sent DH to buy a killer. Can't have my dogs' noses bitten... This is the summer from Hell. We are decorating for Autumn early this year with high hopes of chilly nights and cool days.

Those little worm poops like a stack of cannonballs at the ready. Nice shots.

I don't allow dorks on my blog so you are obviously NOT a dork ;0)

I see in your second comment that you got lucky and found FIRE ANTS!!! Lordy! Run Forrest RUN!

Hey! Welcome :0)
I'm glad you like my very upset little beastie.
Thanks for the Bug Guide link.

Yeah, well thanks, but you got much cooler stuff:0)

You and my husband :0D I can't tell you how uninterested he was. I think he had a serious case of the 'willies'. But you raised worms! Well that's cool.

Wasn't this fun!? I'm so glad my little beastie intrigues you.

And I am so excited! I finally got a picture of spider eyes. Yea!

I know, I know . . . I'm kicking myself for not shoving a penny in there. But there was so little time - everybody was scurrying for cover - including my husband :0D

Yes it does - Oh, my! Yes, it does. Some that give us the willies, included.

I loved your skink - and the size really helps. Like I said to Cestoady, though - things were moving pretty fast.

Man! There's no topping that snake!

Sorry dude! I was sure you'd have seen it on one of your demented fellow bloggers posts :0)
Next year I know you'll be one of the top contenders.

Well same goes for you as Larry above. On the other hand - you manage very well without flipping rocks :0)

Yes! I'd thought of mentioning that they looked like a stack of cannon balls and didn't so as not to reveal myself as too war-like in my Rorschach revelations. Thanks!

Viagra is the medicine that is recommended by doctors worldwide for erectile dysfunction. It is the chemical composition of both forms of this drug and helps to cause erection on stimulation of the penis by inhibiting the enzyme phosphodiesterase type 5 which causes smooth muscle relaxation and a better erection.

Propecia is a steroid reductase inhibitor, works by reducing the amount of the hormone dihydrotestosterone in the body. This may block certain types of hair loss in men.

I love it ! Very creative ! That's actually really cool Thanks.

FDA approved mens health medication viagra is not a drug to be taken lighliy you should read all about the pros and cons regarding the medication before you buy viagra!

First off all I would like to thank you for that great post. It's very interesting to read your posts. As I can see, a lot of people here knows much about ED treatment maybe they can help me. For a long time I can't decide what is better: to buy viagra, to buy cialis or to buy levitra? I found this Canadian pharmacy to buy all this things, so can somebody help me to make a decision? IMHO I should buy viagra online

Generic Viagra contains Sildenafil and it is a prescription drug used to treat erectile dysfunction. Erectile dysfunction is the inability of the penis to become rigid, or stay firm long enough to complete the sexual act.Generic Viagra is used to increase blood flow to certain areas of the body, as a muscle relaxant and as a male impotence or erectile dysfunction treatment. Generic Propecia is a one-a-day, FDA-approved, treatment for male pattern hair loss at the crown or in the middle of the scalp (androgenetic alopecia). Generic Viagra is the world renowned medicine for erectile dysfunction and most men have forgotten they ever had a problem with erections after its use. Take it on empty stomach and it will work in 30 minutes. Erections can be achieved on stimulation.Generic Cialis is consumed orally and has quickly become one of the most prescribed medications. Generic Levitra has been clinically proven to improve erectile function, even in men who had other health factors, like high cholesterol, high blood pressure, or diabetes

I have to agree with Ruth when she says that "I haven't been terribly curious about things that lurk under rocks". For me those small and jelly creatures look icky. I'm not really a big fan. But, I have to say that your post is nice.

I really glad to find such a site.Thanks for sharing such a great stuff.

You made some good points there. I did a search on the topic and found most people will agree with your blog.

I've seen the scorpion and a worm, kinda a creepy yet so earthly. I love nature and how its beauty is unfold, in some way, in this blog. 24 hour locksmiths Bournemouth also unleash their techniques in bringing locksmiths to 21st century.

Because of the worms, the soil became so healthy. They are such a great help. Peerscosmetic, conducts free consultation to help you back in shape with the latest water lipo, a technology for having the desired body.

Monsieur Louboutin once said, "sexy is too vast to be defined, but more than anything it's an attitude much like elegance." Christian louboutin shoes is the perfect juxtaposition between sexiness and elegance. Whether you dress her up or dress her down, she will add a bit of attitude to any ensemble.
DIscount moncler uk , cheap Babyliss Hair Straightener, CHI Hair Straightener.

Mirror, mirror on the wall, crystal is the fairest bauble of them all. This winter, let your feet marvel and sparkle with the likes of Lady Lynch Zeppa, Stellis, So Private, Calypso, Beaute Strass, Pigalle or made-to-measure crystallized high-tops(see Mika's latest cideo.) But be warned, crystal gazing can lead to a hypnotic state. There again, those darling Druids would beg to differ as would Queen Victoria who ordered up Crystal Palace and fervent fans of Naico Mine's 'Cave of the Gaints' in Chihuahua, Mexico. If visiting the latter, pack your Christian louboutin shoes and matching hairnet; the humidity is frizz bang outrageous.
DIscount moncler uk , cheap Babyliss Hair Straightener, CHI Hair Straightener.

Hi! Thanks so much for taking the time to share your post; this posting has evoked the most response.